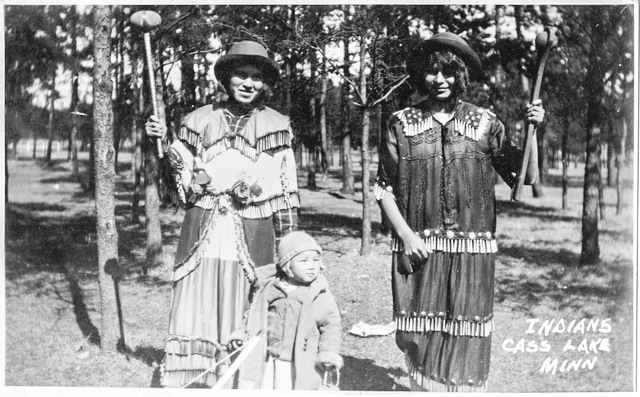 On April 3, the Mille Lacs Indian Museum and Trading Post in Onamia will open a new exhibit called Ziibaaska’ iganagooday: The Jingle Dress at 100, examining the origins, history and importance of the jingle dress (known as ziibaaska’ iganagooday in Ojibwe) as it marks its 100th anniversary.

These dresses, featuring rows of metal cones that jingle as the dancer moves, began to appear in the upper Midwest in the early 20th century. Oral histories vary on where the jingle dress exactly started, but stories often trace it back to the Mille Lacs Band of Ojibwe in central Minnesota or the Naotkamegwanning First Nation in Ontario near Lake of the Woods.

Jingle dresses, circa 1920. Photos courtesy of the Minnesota Historical Society

After he told his wife the dream and showed her the springlike dance steps he saw, she and other community women created the dresses.

Later the man shared his dream more widely, and the women demonstrated the dance. At the same time, the man’s daughter was very sick, hardly able to move. When the women began to dance, the girl stirred and watched, and by the end of the evening, she was up and dancing with the women.

While the exact details vary from community to community, stories of the jingle dress often feature the dress appearing in a dream and someone who is healed by the dance.

Brenda Child, a Northrop professor of American Studies and American Indian Studies at the University of Minnesota — and who was born on the Red Lake Ojibwe Reservation — curated the exhibit.

Child noted that the dress and its associations with healing first appeared around World War I, perhaps in response to the global influenza pandemic.

A jingle dress created in the 1920s by Starry Benjamin Skinaway with the Mille Lacs Band of Ojibwe.

Not only were Ojibwe communities experiencing physical illness around this time, but encroaching government and timber interests also threatened Ojibwe land ownership on reservations. Meanwhile, in 1921, the federal government issued a new order banning traditional dancing among American Indian communities.

Despite these threats, the jingle-dress dance flourished and spread across Ojibwe communities in the Midwest and was adopted by some Dakota peoples as well. By the 1930s, the dress appears in postcards of Ojibwe women from all across Minnesota and North Dakota.

The jingle-dress dance began to spread to even more Native communities in the 1980s, becoming “a pan-Indian phenomenon,” according to Child, as the competition powwow circuit, which includes dance competitions, grew in popularity.

Jingle dress regalia, created in 2008 by Jessica Rock of the Leech Lake Band of Ojibwe for the Minnesota Historical Society.

Today Native women with a wide range of tribal affiliations compete in traditional and contemporary jingle-dress dancing around the U.S.

In The Jingle Dress at 100 exhibit, visitors will be able to examine historic photos and see a variety of jingle dresses from different time periods that show how the tradition has grown and changed over the last century.

The exhibit was developed in partnership with the University of Minnesota Department of American Studies and the Mille Lacs Band of Ojibwe community.

Lauren Peck is a public relations specialist for the Minnesota Historical Society.