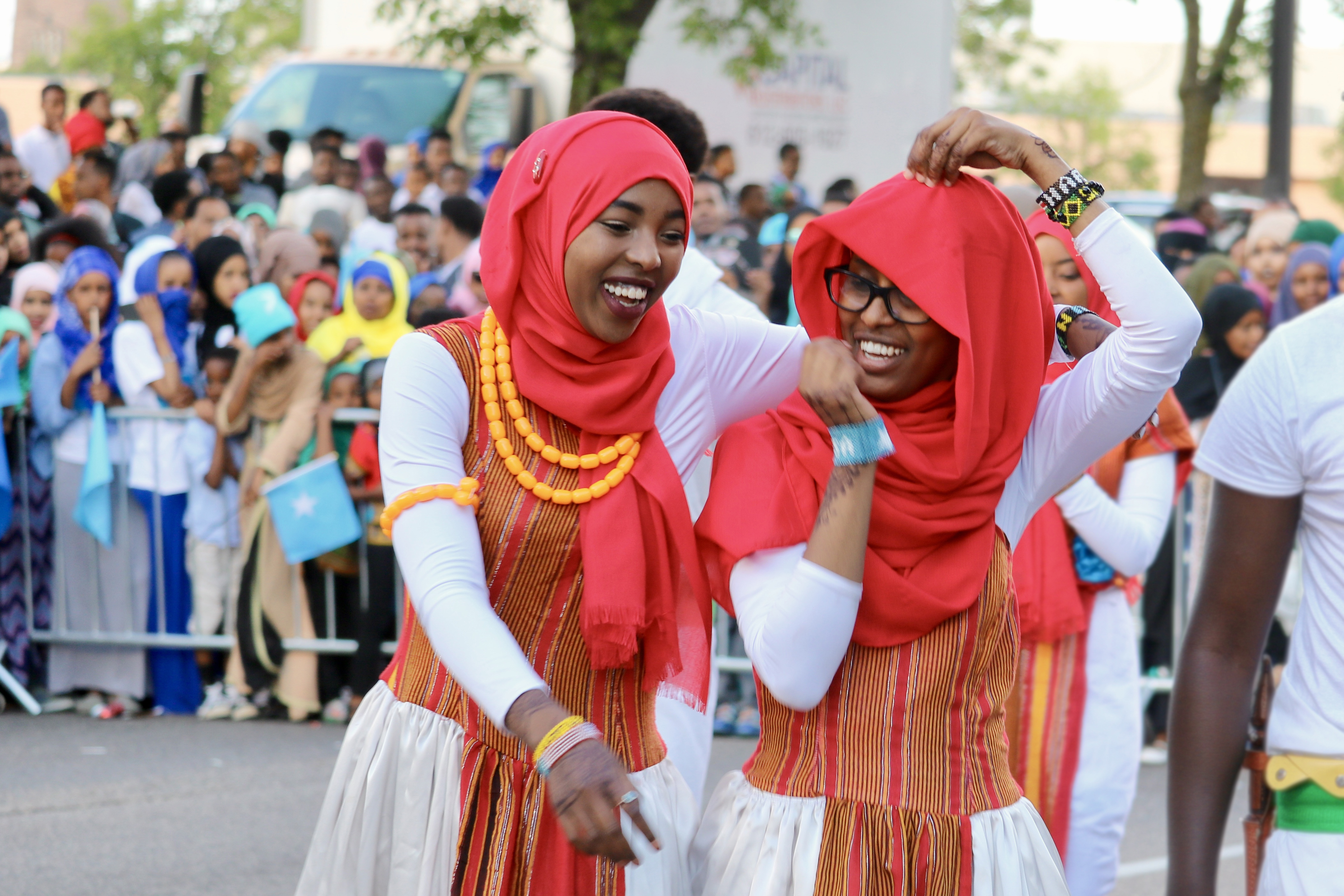 On June 26, 1960, British Somaliland gained independence from Great Britain. A few days later, on July 1, another part of the country, Italian Somaliland, shook off the yoke of Italian colonialism, and the two territories united to form an independent nation — Somalia.

Each year Somali Minnesotans celebrate this independence with a weeklong festival and family-friendly street fair with music, food and Somali street dancers, sponsored by Ka Joog, a Somali-American youth organization.

This year the street fair will be from 1–8:30 p.m. June 30 on Lake Street at Blaisdell Avenue in Minneapolis.

Today Minnesota is home to more Somalis than any other U.S. state. The most recent census data estimates the population in Minnesota is 57,000, though community members boast that the number is now closer to 100,000.

The first Somalis arrived here as students and scholars in the 1960s. Following the outbreak of Somalia’s civil war in 1991, Minnesota became a destination for refugees as well.

Haji Yussuf settled in St. Cloud after hearing from his cousin who was already in Minnesota. Yussuf believes that “It’s not about the weather. It’s about the people. People can warm your heart even when it’s cold.”

While immigrant groups often share common experiences, there are also important differences. Many Somali people have suffered physical and emotional trauma due to fleeing a civil war and moving to a place with different cultural and religious traditions.

Those who settled here represent a cross-section of life in Somalia and include teachers, students, civil service workers, farmers, nomads and business owners. In a short time, Somalis in Minnesota have established roots and made significant contributions to their own well-being and to the betterment of the state.

The Cedar-Riverside neighborhood hosts the largest concentration of Somalis in Minnesota and has become a hub for the Somali community because of its many organizations, businesses and mosques. In 1998, the first Somali mosque opened, called Dar Al-Hijrah, which means “Home of Migration.”

From the start, its leaders provided civic education along with religious guidance. Today, they explore how Islam is compatible with democracy through their sister organization, the Islamic Civic Society of America. Lectures, classes and community conversations bring Muslims and non-Muslims together.

A dhiil (deel) is a milk container made of carved wood used by nomadic families in Somalia. It’s one of the artifacts in the collection of the Somali Museum of Minnesota. Photo courtesy of Nikki Tundel

Somalis have also built extensive networks to help them find housing, employment and educational opportunities. For example, the African Development Center, which has offices in Rochester and Willmar, provides interest-free home loans to Somalis and other Muslims who follow Islamic law (which prohibits collecting or paying interest).

The Somali business community has earned a national reputation for successful, small-scale entrepreneurship. Just this April, Abdirahman Kahin, owner of Afro Deli, earned a 2018 St. Paul Business Award from the city council. Kahin says of his restaurant, “I always had that dream, you know, how to bring people together.”

Somali youth are pursuing educational opportunities in many higher-education institutions. Ka Joog was founded in 2007 as a way for youth to use education to help them make better decisions.

As Somalis hold onto their traditional culture, they also embrace opportunities to get involved in American society through civic, cultural and political organizations. Abdi Warsame joined the Minneapolis City Council in 2013, and in 2016, Ilhan Omar became the first Somali-American elected to the Minnesota Legislature.

“I think being an immigrant makes me overly optimistic,” Omar said. “I was raised by people who’ve always dreamed of being part of a free political process. For me, this is exhilarating. This is the American Dream.”

During the civil war in Somalia, the centuries-old cultural history museum in Mogadishu was destroyed. In 2009, Osman Ali began collecting artifacts of his native Somalia’s traditional nomadic culture in an effort to preserve this story before it disappeared. Now, more than 700 objects are in the collections of the Somali Museum of Minnesota, which operates a gallery on Lake Street in Minneapolis.

For Maryan Del from Minneapolis, it might be a bit of both: “I have two homes — my American home and my Somali home. I have two cultures, two languages, so this is part of my life. I grew up half of my life here, and I invested a lot. And I think Minnesota invests in me a lot.”

Jessica Kohen is the media relations manager for the Minnesota Historical Society.