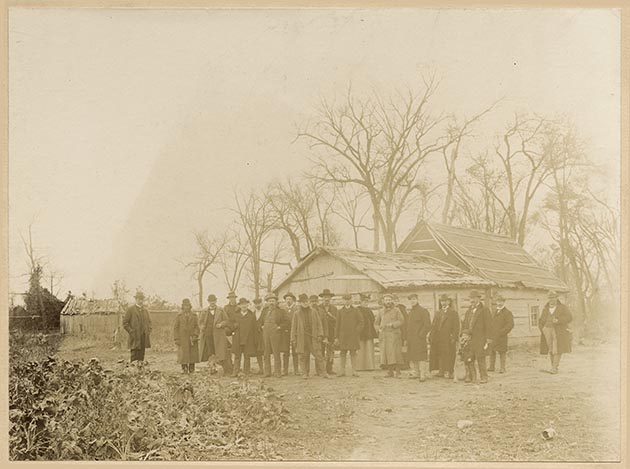 The home belonging to Bagone-giizhig became part of the battleground for the Battle of Sugar Point near Leech Lake in 1898. Photo courtesy of the Minnesota Historical Society

In the late 19th century, tensions were high between many Ojibwe in northern Minnesota and the government, including conflicts over logging on reservations.

Timber companies often violated the law, taking more trees than allowed and were late with tribal payments for the wood. On Sept. 25, 1898, less than two weeks before the Battle of Sugar Point, several Ojibwe leaders petitioned President William McKinley, writing, “We now have only the pine lands of our reservations for our future subsistence and support, but the manner in which we are being defrauded out of these has alarmed us.”

Bagone-giizhig, an Ojibwe Indian, became a central figure in the last official conflict between the U.S. military and American Indians in 1898 near Walker, Minn. Photos courtesy of the Minnesota Historical Society.

The battle also grew out of attempts to arrest an Ojibwe man who lived on Bear Island in Leech Lake, Bagone-giizhig, whose Ojibwe name means Hole/Opening in the Sky/Day.

In early 1898, he was arrested on a bootlegging charge and taken to Duluth for prosecution. When he was released due to lack of evidence, Bagone-giizhig was forced to find his own way back home through 100 miles in cold April weather.

This treatment of American Indians wasn’t uncommon for local authorities.

So when Bagone-giizhig (sometimes spelled Bugonaygeshig) was called to Duluth as a witness in a trial later that year, he ignored the summons. Local authorities eventually arrested him in September 1898. However, when authorities led him to a boat to head to Duluth, several nearby Ojibwe fought back and helped him escape.

The local deputy marshal sent a telegram to St. Paul asking for military assistance to arrest Bagone-giizhig and 20 people who helped him. On Sept. 30, about 20 soldiers from Fort Snelling arrived in Walker, near Leech Lake. The two sides attempted to negotiate, but soon the government side called for more men.

Even as some 77 troops — led by Gen. John M. Bacon — boarded steamers on Oct. 5 to cross Leech Lake to Sugar Point, a small peninsula, nobody on either side truly expected a battle. Both sides agreed not to shoot unless they were shot at first.

After arriving at Bagone-giizhig’s cabin on Sugar Point, the soldiers searched for the wanted men, eventually arresting two, while 20 or so Ojibwe fighters stationed themselves in the woods. Bagone-giizhig himself wasn’t involved in the fighting; instead, he left his home to wait things out somewhere safe.

A funeral for the soldiers lost in a conflict with American Indians at Sugar Point on Leech Lake was held at Fort Snelling. Photo courtesy of the Minnesota Historical Society

There are two versions of how things turned into a battle. The military claimed one of the soldiers, who were mostly new recruits, failed to set the safety on his gun. It accidentally discharged, causing the Ojibwe side to think they were being fired on.

(Henry White, the son of Bah-Dway-We-Dung, who fought in the battle, disputed that claim much later — in 1970 — when told the Minneapolis Tribune the real story involved a soldier firing on Ojibwe women in a canoe. The Ojibwe men shot to defend the women, starting a fire fight, he said.)

By the morning of Oct. 7, the soldiers left Sugar Point with six men dead and 10 wounded, plus one civilian death — an American Indian police officer, who may have been mistaken for one of the Ojibwe fighters.

Most of the casualties occurred in the battle’s first half hour. There were no reported casualties or wounded among Baghone-giizhig’s defenders.

As word of the fighting spread, panic and misinformation ensued, fanned by members of the press, who had few facts of what it had happened. Several northern Minnesota newspapers announced oncoming American Indian attacks, and residents in Bemidji even locked themselves in a courthouse until a militia came from Duluth.

A 1980s oral history of the battle by the Leech Lake Indian Reservation Business Committee summed up what was really going on: “Contrary to popular belief, there weren’t hundreds of Chippewa Indians on the warpath. There were perhaps 20 men … involved in a skirmish.”

Gov. David Clough received many reports from concerned citizens asking for military protection, and he insisted the War Department send reinforcements. The federal government had received word of the battle’s details from Bacon, and decided to station soldiers along the Great Northern Railway north of Leech Lake to help quiet fears.

On. Oct. 10, William A. Jones, the U.S. Commissioner of Indian Affairs, arrived and began meeting with Ojibwe leaders, who shared their side of the story and the grievances they had with the U.S. government.

They met in council for about a week and eventually agreed to give up the men who still had warrants out for aiding Bagone-giizhig. They each were sentenced to two to six months in prison, and President McKinley issued a general pardon in June 1899 for everyone involved in the battle.

The battle served to publicize many of the problems the Leech Lake Ojibwe had experienced. Jones announced in the New York Times that the practice of taking American Indians hundreds of miles to trial and then “turning them adrift without means to return home” was a problem. He also spoke out against the illegal logging practices.

Bagone-giizhig himself was never arrested and eventually reappeared in the Leech Lake area. He went on to appear in many parades in Walker until he died at age 80 in 1916.

Lauren Peck is a media relations and social media associate for the Minnesota Historical Society.