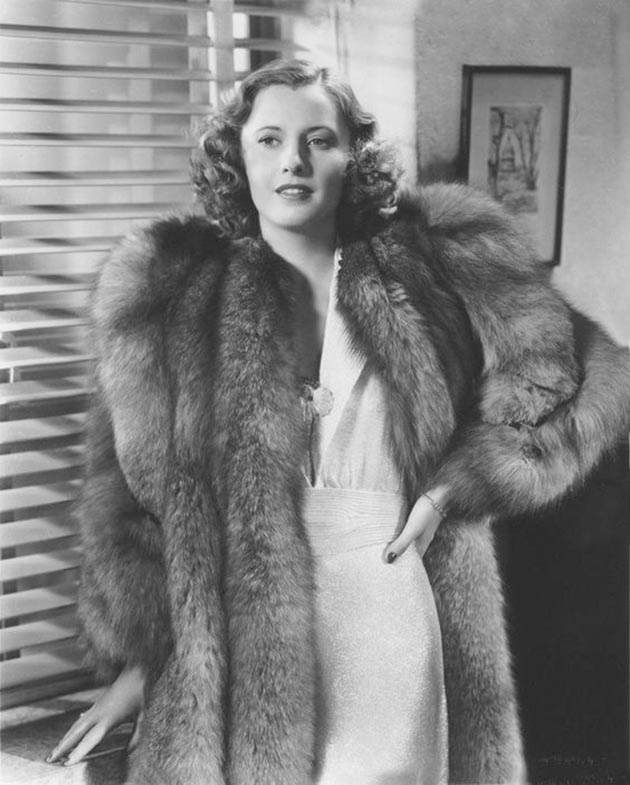 The clothing women wore in the 1940s was perfect for me. Alas, it had all but disappeared in the 1950s when I entered my 20s and became fashion conscious.

I was cursed with the advent of the “New Look” (more about that later.)

Being reasonably short, and lacking a long torso, I fit the picture of 1940s women for whom this clothing was designed. Best on me are the cute little suits with the abbreviated jackets, the ¾-length sleeve coats and wide-brim hats. Even the much-used shoulder pads worked.

Glamorous stars in Turner Classic Movies’ black-and-white ’40s flicks wear all of these items to their full potential — as well as others that make me drool.

Capes top the list. What could have been more mysterious and dramatic than the long-hooded cape — actually a cloak — that Gene Tierney wore in Laura?

It contributed to the mystery surrounding her (the crux of the picture).

I also have a great love of furs. Full-length mink coats, jackets, stoles — even muffs — were a staple for Barbara Stanwyck and Alexis Smith in their many dramatic roles portraying snooty rich women. And then there were the luscious chinchilla and white ermine wraps covering evening gowns.

And, oh, those movie evening gowns.

They were elaborate, fancy and “ooh la la” sexy on the backs of gorgeous actresses rumbaing with actors attired in white evening jackets on the dance floors of elegantly appointed night clubs. (Think Rita Hayworth and Glen Ford in Gilda.)

I often wish TV’s Dancing with the Stars would copy some of these sophisticated creations for their dancers instead of always putting them in something sequined and backless.

As for hats, the movies went all out. Many were concoctions using feathers, veils or bows, specially designed to match the rest of the outfit — or the character.

Dizzy, zany Billie Burke wore a perky beret made of two appliqued doves, which only added to her ridiculous persona in Washington Melodrama.

I won’t even get into movie wedding gowns — except to say that satin was the fabric of the day, as were long veils and trains, imaginative headdresses and puffed sleeves for bridesmaids — all total fantasia.

Ditto for bathing suits. Esther Williams’ one-piercers were works of art that made strong fashion statements.

There is, of course, a downside: Much ’40s clothing was tailored, with annoying long, side zippers and tiny buttons.

But overall, women’s fashions of the 1940s oozed class. Men’s — a double-breasted suit and Fedora, a la Humphrey Bogart — not so much. But it all went together.

I simply was born in the wrong era. Wispy waists, soft shoulders and dresses worn below mid-calf were the hallmark of the 1950s, thanks to Christian Dior, who incorporated them into his “New Look.”

Audrey Hepburn was made for the New Look. Melania Trump wears a version of it today.