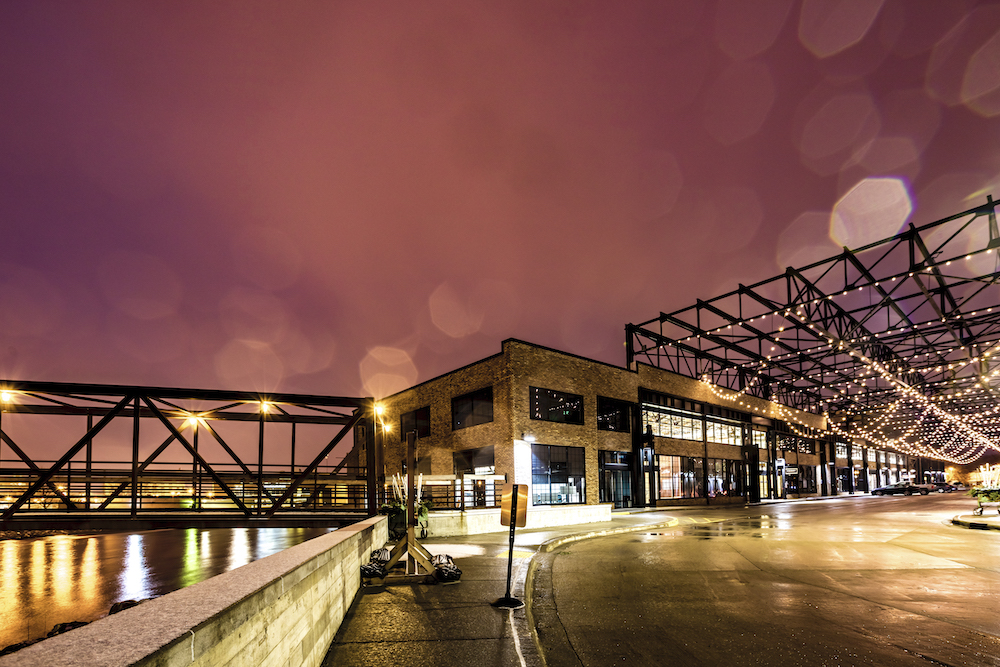 A new pedestrian bridge over the Rock River in Beloit connects the Ironworks Hotel with the Ironworks Golf Lab, which offers indoor golf performance training and entertainment. Photos courtesy of Visit Beloit and the Janesville Area Convention and Visitors Bureau

Beloit and Janesville, Wisconsin — apart by about 10 miles — are friendly rivals much like our own Twin Cities.

Both straddle the scenic Rock River as it rampages along. Both are predominantly blue-collar towns that got walloped by the Great Recession of ’08.

But both decided not to lie down and die. Their citizens vowed to survive; so they pulled themselves up by their well-worn bootstraps and made their communities even more inviting than before.

Today, instead of fleeing, residents are pouring in — and so are tourists.

Beloit, the southernmost of the two (population 36,000), is planted virtually on the border with Illinois, so don’t be surprised to encounter troops of cool Chicagoans vying for space in downtown hotels and restaurants — establishments that would look right at home on the Windy City’s elite Lake Shore Drive.

A local business owner, who refused to let her beloved town shrivel, bought the Beloit Inn and renovated it into Ironworks Hotel, a luxe boutique on the bank of the Rock River. It boasts a rough-hewn industrial charm, along with a destination restaurant: Merrill & Houston’s Steak Joint features nine cuts of premier beef as well as duck a l’orange, shrimp scampi and barbecued ribs.

Across the street and envisioned by the same owner sits Hotel Goodwin, Ironworks’ cosmopolitan sister, with a cool demeanor celebrating edgy art and an enviable vinyl collection (turntables in every room). Its restaurant, Velvet Buffalo Café, starts dinners with a strawberry, beet and watermelon salad, followed by organic salmon, fried chicken with sweet-corn pudding, or my choice, Berkshire pork belly enhanced with tomatillo, pineapple and Fresno chilis. Pizza from its stone-fired oven is a big hit here, too. Then, which tart will it be? The truffle s’mores version or the blueberry and sweet corn?

The Powerhouse, an aptly-named student union, recreation center and athletics facility, is opening this fall and will welcome students from the Beloit College campus it anchors — as well as the general public. The college, founded in 1846 and older than the state of Wisconsin itself, reminds me of our own Macalester with its campus of tumbling greenswards.

The campus’s Logan Museum of Anthropology welcomes one and all to examine its collection of objects, mostly gleaned from Mexico and Central America — baskets, pottery, bandolier bags and more. Its neighbor, the Wright Museum of Art, operates four galleries of rotating exhibits (etchings and American landscapes on my visit), all purposely displayed without identifying labels to make students do their own research. Both museums are free.

The town’s old-timey Main Street could double as a movie set for small-town Americana. Pink petunias overflow their sidewalk beds. A bandstand awaits summertime’s free concerts. Rod, proprietor of the 100-year-old barbershop, shows off his vintage clink-clink cash register and penny scale. Tin Dog Records boasts vinyl, new and used. At Stanton Shoes, we glimpsed a clerk down on one knee to measure a lady’s feet, just like back in the day. A neon sign in a second-story window promises pole-dancing lessons.

My Apt @ 429 sells vintage furnishings and clothes. (Don’t miss the beaded handbags). And from May–October on Saturdays downtown is the site of a vibrant farmers market.

If you can’t wait that long for a bite, check out truk’t (by the same woman who developed the hotels), which intrigues diners with its trendy takes on tacos, such as Peking duck and shrimp curry. They know their margaritas, too.

OK, it’s Wisconsin: Gotta have beer. So a brand-new brewery has arisen in the gorgeous countryside just outside town. G5 Brewing Company is the dream-come-true of five Gunderson family members, who serve flights and pints and tasty bar food. (Go for the crab cakes!)

Janesville, population 65,000, has a similar economic story to tell, with another happy ending. For years the small town, home of politician Paul Ryan, produced elite, made-to-order Parker pens, until production was moved offshore. Well, there was always General Motors, which employed practically everybody else in town. Until it didn’t. It closed two days before Christmas 2008. Mr. Ryan offered no help, nor did anyone else to whom the city reached. So the townsfolk fueled a renaissance all by themselves.

A new hotel with restaurant, Cobblestone Hotel & Suites and Wissota Chophouse, recently opened on Milwaukee Street, and not far away, diners flock to Lark, which debuted in 2017. “Janesville,” said its owner, “was chains-ville. The city was hungry for a good new restaurant.” Chefs’ resumes flowed in from “all over the country.” This evening, its customers range from partying millennials to a lady of a certain age sporting a shaved head, save for a magenta mohawk. The kitchen specializes in New American comfort food — fried green tomatoes, farro salad, barbecued shrimp, pheasant from a local farm.

For breakfast, follow the paramedics (as we did) leaping out of their vehicle to scurry into Citrus to stave off a caloric, rather than medical, emergency via its famous fresh orange juice, plus Benedicts galore. Or start the day with bangers and mash and other Irish fantasies at O’Riley and Conway’s. Their owners have been in business in this space since 1933, opening just moments after Prohibition was repealed.

Stroll the victuals off in the lovely Rotary Botanical Gardens — a former gravel pit gorgeously repurposed into 20 acres hosting 24 different garden styles and 4,000 varieties of plants. On select nights in November/December, see it all decorated with holiday lights.

Then comb Main Street for more eye candy in the form of murals like the one saluting Chief Black Hawk (above). It shares the block with Carousel Consignments, where owner Joni has curated collectibles for 28 years — cigar boxes and comic books, spinning wheels and dinner bells.

The Rock County Historical Society opens Janesville’s historic Lincoln-Tallman House to visitors, including over the holidays. President Lincoln overnighted there in 1859.

I took the “Help Wanted Tour” in which visitors take on roles of servants: My laundry-folding failed to pass inspection; I was put on table-setting duty instead.

Carla Waldemar is an award-winning food/travel/arts writer. She edits the annual Zagat Survey of Twin Cities restaurants and writes food and travel articles for publications around the world. She lives in Uptown.