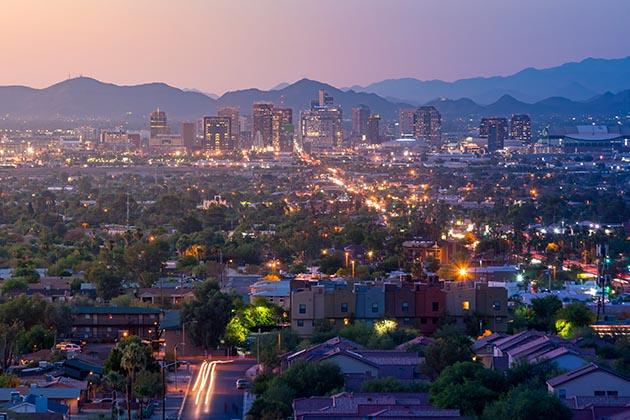 Arizona is known worldwide as the home of the Grand Canyon, one of the most amazing natural wonders of the world.

It’s one of the deepest gorges on earth, attracting visitors from across the globe.

But to visit only the mother of canyons on a trip to this state would be to miss out on the other amazing places in the Grand Canyon State.

The state capital is known for its big-league sporting events, but there’s so much more.

Stop by the Jewel of the Desert, The Biltmore Resort and Spa, the only existing hotel in the world with a Frank Lloyd Wright-influenced design.

Don’t miss the Heard Museum to learn about one of Arizona’s artistic treasures, the Katchina dolls (spirit dolls fashioned by the Hopi Indians).

Perched on the famed Route 66 and surrounded by the world’s largest ponderosa pine forest, this mile-high city is a multi-season destination. Wander around Heritage Square and historic downtown, step into the past at the Arizona’s Pioneer Museum or look beyond at the Lowell Observatory, where scientists first discovered Pluto in 1930.

North of Phoenix, visit an experimental town developed by architect Paolo Soleri based on the concept of arcology which tries to improve urban conditions while minimizing the destructive impact on the natural surroundings. There are various mixed-use buildings, including many housing working artists such as Soleri Windbell Studios.

This popular, gorgeous area is favored by golfers and vacationers alike, looking for a sunny winter getaway. During the winter, it’s possible to ski on Mount Lemmon Ski Valley, the southernmost ski resort in the U.S., and return to the city to bask in the sun, poolside. Explore the art, architecture and culinary scene in the downtown’s Presidio Historic District, including St. Augustine Cathedral.

Grab your cowboy hat and head to the Town Too Tough to Die. This historic, once rough-and-tumble cowboy town today features a main street lined with old saloons, candy shops and gift stores. Ride a stage coach through town, see a reenactment of the famed gunfight at OK Corral and visit Boot Hill.

Ninety miles southeast of Tucson, this town of 5,500 is home to the historic Copper Queen Mine. The once-flourishing city boasts a preserved turn-of-the century downtown that today is dotted with artist studios, antiques shops and ghosts. Don your hard hat and yellow slicker and take a tour 1,500 feet into the old mine.

Nestled in an area of red sandstone buttes surrounded by nearly 2 million acres of national forest, this resort town of 10,000 is noted for hiking and biking. It’s an artist community best known for its natural geomagnetic points called vortexes, which are said to facilitate healing and spirituality.

Not far from Sedona — up a road of hairpin turns — is the funky old ghost town of Jerome. It was once called The Wickedest Town in the West back in the day when copper mining was king and the streets were lined with brothels and saloons. Today, it’s known as an artist’s haven with many art galleries and reportedly haunted locations.

At 5,300 feet, this city is blessedly cool in summer and is a showcase for Victorian homes as well as classic saloons. Visit Whiskey Row, where the gunslingers drank and fought. It’s also home to the world’s oldest annual rodeo, held every summer. Watson Lake, northeast of town, is a picturesque destination withgorgeous views and access to stunning rock formations known as the Granite Dells.

Sandra Scott is a longtime freelance travel writer based in Mexico, N.Y. Learn more at sanscott.com.